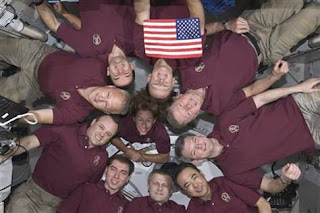 Visit msnbc.com for breaking news, world news, and news about the economy

The 10 space travelers spent Sunday putting some final items in Raffaello, the Italian-made cargo canister that's the size of a bus.

The compartment will be moved from the International Space Station back onto space shuttle Atlantis early Monday. It carried up tons of food, supplies and other household goods. And it will return with dozens of bundles of trash and discarded equipment.

Atlantis will undock from the space station Tuesday, after a visit of more than a week, and aim for a Thursday landing back in Florida to end 30 years of shuttle flight.

Hope I get to see the next generation of Space Travel... Maybe even go:)