I keep getting asked this question, by new Computer Users. So, here's a video I made on How to Copy and Paste in Linux or Windows. And I show how to send a Web Page Link from Firefox in Fedora Linux. As a way to demonstrate hot to Copy and Paste. Check out the links below too, for more good Articles, info and another video I found....

How to Copy and Paste in Linux or Windows

How to Copy and Paste

Docker, Inc. (formerly known as dotCloud) is the company behind the open-source Docker project and the growing Docker ecosystem of people, products, platforms, and partners revolutionizing the way code is built, packaged, and deployed.

Docker aims to enable a new age of agile and creative development, by building "the button" that enables any code to instantly and consistently run on any server, anywhere.

Docker is an open source engine that enables any application to be deployed as a lightweight, portable, self-sufficient container that will run virtually anywhere. By delivering on the twin promises "Build Once…Run Anywhere” and “Configure Once…Run Anything," Docker has seen explosive growth, and its impact is being seen across devops, PaaS, scale-out, hybrid cloud and other environments that need a lightweight alternative to traditional virtualization. (Click here to read more about Docker.)

The people of Docker, Inc. are the original authors and the primary contributors to and maintainers of the Docker project. We also run the platforms and systems that make the Docker project run, including the Docker public Index and provide materials and support to the rapidly expanding Docker community.


Server virtualization for the last decade has been dominated by the concept of virtual machine hypervisors of the type used by VMware ESX and others. There is another form of virtualization known as container-based virtualization that is now rising in popularity, thanks in no small part to the open-source Docker project and its commercial backer, Docker Inc.

Docker is now at the release candidate stage for its 1.0 release, which will mark a significant milestone.

In a video interview, Docker CEO Ben Golub details why the Docker model makes sense for server virtualization and how the open-source project and his company will move forward with the 1.0 release.

Lately Docker has emerged as a key technology for deploying applications in the cloud environment. Compared to traditional hardware virtualization, Docker-based container sandbox provides a number of advantages for application deployment environment, such as lightweight isolation, deployment portability, ease of maintenance, etc. Now Red Hat is steering community efforts in streamlining the management and deployment of Docker containers.

Not only for the cloud environment, Docker can also be quite useful for end users, especially when you want to test out particular software under a specific Linux environment. You can easily spin up a Docker container for the target environment, install and test the software in it, and then throw away the container once you are done. The whole process from beginning to end is quite efficient, and you can avoid messing up your end system all along.

In this tutorial, I am going to describe how to create and manage Docker containers on CentOS or Fedora. Note that Docker is supported only on 64-bit host systems at this time.

Install Docker on CentOS or Fedora

I'm cleaning up a Virus Infected Windows Vista System. For my neighbor. I have run Linux, for most of my systems since 2005. So, I did some reading on the Current Best Antivirus and Firewalls. I thought that Comodo, would be best for this person. But it wont run on Vista. And Avast wouldn't even run the installer in Vista. So, now I'm trying Panda. Let's see how that goes!...

WinMerge is an Open Source differencing and merging tool for Windows


WinMerge is an Open Source differencing and merging tool for Windows. WinMerge can compare both folders and files, presenting differences in a visual text format that is easy to understand and handle.

WinMerge is highly useful for determining what has changed between project versions, and then merging changes between versions. WinMerge can be used as an external differencing/merging tool or as a standalone application.

In addition, WinMerge has many helpful supporting features that make comparing, synchronising, and merging as easy and useful as possible: 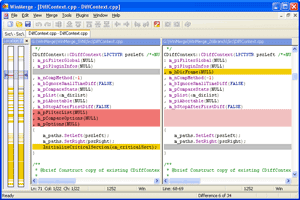 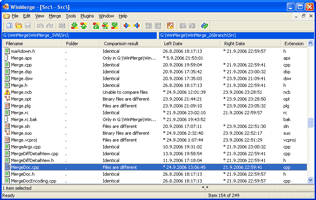 WinMerge is an Open Source differencing and merging tool for Windows