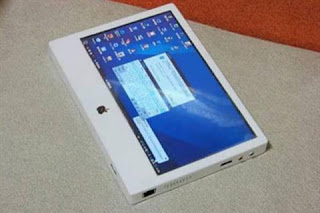 Don't buy an IPAD, Make one!

When [Liu] decided he wanted one of the new iPads, rather than fork out the cash he decided to build his own tablet Mac. His creation functions just as you would expect any tablet PC with some nice extra features such as running on Windows XP for any of you Microsoft lovers. [Lui's] tablet apparently only cost him about $300USD, about half the price of the real thing. The two part video shows the entire construction in fast forward including a demonstration of the final working product. It looks like the tablet is built using spare tablet/laptop components and the case is constructed from sheet aluminum before being painted and labeled with apple stickers. The final product is a bit thicker than the real thing but looks great in the laptop style case [Lui] has whipped up. Kudos to the guy for saving a few bucks and making something great in the process, the video after the break is definitely worth a watch. This isn't the first time we've seen this kind of thing, actually we've seen a few.

Mac tablets made by fans 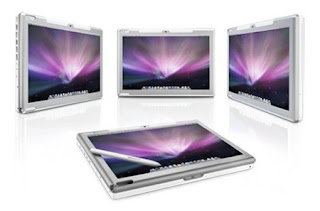 Macintosh makes a lot of wonderful pieces of technology, but they do not make a tablet. Pictured above is the Modbook, the closest you can currently get to a Mac tablet. Though not officially built by Apple, they are an Apple Premier Developer and that isn't too shabby.
Several people have taken it upon themselves to fashion Mac tablets of their own, varying from extremely professional looking finishes down to duct tape and wire. Lets take a look at some of the more popular ones out there.

First lets go to the place that started many of these projects. Though not strictly a Mac tablet, the projects at Bongofish.co.uk deal with making your own Cintiq. The instructions are quite in depth and the forums have several Mac projects to view. 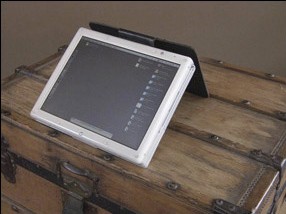 Back around 2004, [Joseph DeRuvo Jr.] put together this fantastic little mod. He grafted a Troll Touch screen to a Mac laptop and made a custom case for it. He did a fantastic job of enclosing everything and making it look great. One cool feature is that the cover that protects the screen, folds back to form a stand when needed. This guy put a lot of hard work into this and it shows.

Another extremely polished model is the iTab. Inspired by the DIY Cintiq at Bongofish, [wiestudios] has put together this beautiful piece. Going more with Wacom than Mac style, it's another fine bit of engineering. It even has an apple and crossbones etched in the back!

Polish isn't everything though, sometimes simplicity can bring a project into the hands of the average Joe. Check out [Florian Mourer]'s ongoing project. He plans on building a custom enclosure at some point, but for now he's got a pretty simple modification working. Again, this one uses a Wacom board so it is pressure sensitive. Unlike the others, he is limited to only a portion of the screen being sensitive due to the size of the tablet he had available.

Our very own [Caleb Kraft] has also ventured into the area of making Mac tablets. Using a cheap Wacom board, some duct tape, a screw driver, and a torx wrench, he shows us how to build a pressure sensitive Mac tablet in 15 minutes.
With the advent of the iPhone, it seems that a Mac tablet should be on the horizon. This is just one of the many cases where hackers have the technology first.
tagged: cintiq, diycintiq, diymactablet, itab, mactablet, modbook, pressuresensitive, tablet, touch, touchscreen, touchsensitive, trolltouch, wacom, wacomcintiq

I have two Laptops that were given to me. An Acer Extensa 4630z and a Dell Inspiron 1525 Laptop. They Both were DOA. Everything looks ok. But nothing happens when I connect power to them. Not even when applied power directly to the Mother Board Connectors. I've really been wanting to get into building Electronics with the new small sized Development Boards. Like the ones from TI (Texas instruments), STMicroelectronic's Discovery, The BeagleBoard, to the ever popular Arduino. I'm in research mode now. Learning and figuring out what Development Board to Use. So, I wonder...