This is such a Cool and Well Built Project! I need to see if I can make a Scanner Camera, for my self... 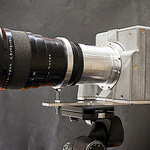 You can make a 143-megapixel camera using a scanner
My scanner-camera project - an album on Flickr
Hasselblad H5D brings the megapixels to Photokina, we go hands-on (video)
Demonstration Quality Scanning Digital Camera

This is the coolest, Pirates Treasure Chest. I have ever seen!:) Captain Herrmano's Mystery Box? The box is a so-called "reverse geocaching puzzle". Check out the video and info, below... 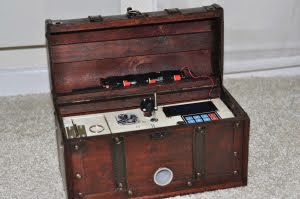 Today we'll be talking about Captain Herrmano's Mystery Box, a piece of hardware that I built over a year ago. But what is this box, what does it do, who was it built for and who is this Captain Herrmano anyway? This will be the topic of this article.

What is Captain Herrmano's Mystery Box?

The box is a so-called "reverse geocaching puzzle". The inspiration for this project was a reverse geocaching box built in 2009 by Mikael Hart. Unlike Mikael's version of the box, it's not enough to simply find and visit the target place. To unlock the treasure of Captain Herrmano, the player has to solve more tasks.

The special thing about this box is that it interacts with the player, and not just via text – it also has sound and light feedback, as well as other means of communication. But more about that later.

So who is this captain anyway? Captain Herrmano is an old pirate, whose spirit guards the chest and guides the player through the challenges. The chest, in turn, contains the pirate's treasure.

A Birthday Present with Consequences


Here's an Article, with some good tips, on what to watch out for, when installing Fedora 21...

How to install Fedora: Hands-on with Anaconda installer

Fedora’s installer is different from the traditional click-next installer and it may be intimidating to a new user. This how-to will help.


Fedora 21 was released this week and it looks like a great release so far, but one area where Fedora can be challenging for a new user is installation. Fedora developers decided to move away from the time-tested wizard-like installer where the user takes various steps in linear order ensuring none of the important steps is missed, instead adopting the hub & spoke model.

While I appreciate the good intentions of UX designers and developers there are a couple of flaws in the installer that make the whole process a bit, I would say, complicated.

Fedora and others mirror.liberty.edu was talking to my server on port 80 but connection was closed by my server
Index of /pub
Index of /pub/fedora/linux
Index of /pub/rpmfusion/free/fedora/updates/13/SRPMS

Some interesting info and links, from WebMD.com...

BPA in Canned Goods May Raise Your Blood Pressure

BPA previously has been linked to a variety of ills, including heart problems, developmental problems in children and high blood pressure. The chemical is widely used in products ranging from plastic bottles and food containers to dental fillings and cash register receipts. In cans, BPA is used as a lining, the researchers said.

"Because these results confirm findings from other studies, doctors and patients, particularly those with high blood pressure or heart disease, should be aware of the possible risks from increased blood pressure when consuming canned foods or beverages," he said.

Previous research has shown that BPA in containers can leach into food and beverages.

Since BPA acts like the hormone estrogen, Hong thinks it raises blood pressure as it interacts with cells in the heart and blood vessels that are sensitive to estrogen.

For the study, Hong's team had 60 men and women, aged 60 and up, drink soy milk from either cans or glass bottles on three occasions. The researchers assessed participants' blood pressure and heart rate two hours after drinking the soy milk and also tested their urine for BPA.

The report was published online Dec. 8 in the journal Hypertension.