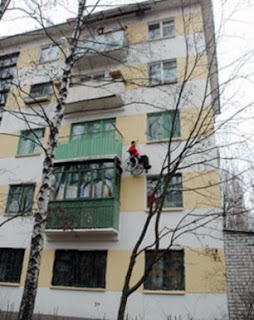 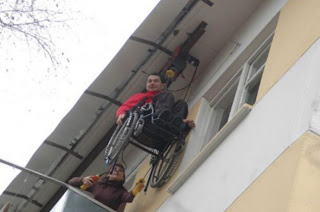 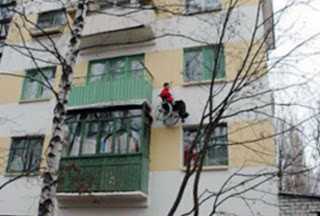 There’s an old saying that goes something like, “When the going gets tough, the tough builds their own 5-story wheelchair lift.”

Actually we’re pretty sure that’s not even close to how the saying goes, but when his local council turned their backs on [Dmitry Bibikow’s] request for wheelchair access to his apartment, that’s exactly what he did.

[Dmitry], an avid mountaineer, was injured in a climbing accident that left him without the use of his legs. Unfortunately for him, he and his family reside on the 5th floor of an apartment building that was not handicap accessible. Rather than move out, he asked the local council to install an elevator, which they agreed to.

Time passed, and as the project sank deeper and deeper into a mire of bureaucracy, [Dmitry] began to lose hope of ever seeing an elevator installed. After six years of relying on friends to help him get in and out of his apartment, he took matters into his own hands and installed a chair lift just off the side of his balcony.

According to [Dmitry] it works great, and he can get from the front door to his apartment well before his more able neighbors make it up the stairs. So far, the city council has not said anything about the lift, and he hopes it stays that way.

After Reading the Original Article at... http://www.dailymail.co.uk/news/article-2017367/Disabled-Dmitry-Bibikow-builds-DIY-chairlift-waiting-SIX-years-council-install-lift.html?ito=feeds-newsxml The Picture is allot Clearer... He lives in Russia and of course things work a little different there than here in the USA. He bought the "Flat" before he was injured. I'm sure just selling and moving would be a hard thing to do there. And I imagine his income dropped after the injury. And of course his Health expenses went up. I love his "Lift"!:) Reminds me of the Cranes inside of the Air Craft Factory I use to work at. I always wanted to take ride on one of those:)