Here is some info and video links, on Cooking with Low Fat Alternatives - Reviews and info on Oil-Less and Air Fryers...

Considering 'frying' is a method of cooking food in oil or fat, how on earth can oil-less fryers exist? Sometimes called air fryers, these fairly new inventions have stormed onto the market, determined to provide a healthier substitute to deep fryers.

We've provided an in depth discussion below, including reviews of the top 5 best models, but if you're interested in seeing the information quickly and easily, here's a table of our findings:

From Wikipedia, the free encyclopedia 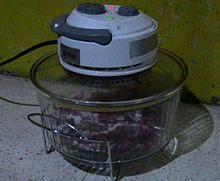 A convection oven (also known as a fan-assisted oven or simply a fan oven) is an oven that has fans to circulate air around food.[1] Conventional ovens, which do not have fans, rely primarily on radiation from the oven walls, and to a lesser extent, on natural convection caused by temperature differences within the oven, to transfer heat to food. In contrast, the fans in convection ovens allow more heat to be transferred via convective heat transfer.[2]

Convection ovens distribute heat evenly around the food, removing the blanket of cooler air that surrounds food when it is first placed in an oven and allowing food to cook more evenly in less time and at a lower temperature than in a conventional oven.[3]

The earliest use of a circulating fan in a domestic oven dates from 1967 by the Malleable Iron Range Company.[4]

A convection oven has a fan with a heating element around, that provides the heat. A small fan circulates the air in the cooking chamber.[5][6]

Convection ovens may include radiant heat sources at the top and bottom of the oven, which improves heat transfer and speeds cooking from initial cold start. On the other hand, some ovens have all the heating elements placed in an outside enclosure and hidden from the food. This reduces the effect of radiant heat on the food; however, the walls of the oven will also be heated by the circulating hot air, and though the resulting temperature is much lower than that of a radiant heat source, it is still hot enough to provide some heating of the food by means of radiation from the walls.[citation needed]

A convection oven allows a reduction in cooking temperature compared to a conventional oven. This comparison will vary, depending on factors including, for example, how much food is being cooked at once or if airflow is being restricted by using an oversized baking tray.[citation needed] This difference in cooking temperature is offset as the circulating air transfers heat more quickly than still air of the same temperature; in order to transfer the same amount of heat in the same time, then, one must lower the temperature to reduce the rate of heat transfer in order to compensate.

Product testing has not demonstrated that convection cooking within a toaster oven results in notable advantages to toasting or baking. [7]

Another form of a convection oven is called an impingement oven.[8] This type of oven is often used to cook pizzas in restaurants. Impingement ovens have a high flow rate of hot air from both above and below the food. The air flow is directed onto food that usually passes through the oven on a conveyor belt. Impingement ovens can achieve a much higher heat transfer than a conventional oven.

Here's a great How To Video. On Automating Video Transcoding, using Windows Batch Files. "The Ingest-a-Tron 9000 is a (relatively) simple Windows Batch Scripting based tool designed to automate the ingestion, transcoding, and transfer process of images and video from a remote ingestion server to an editing workstation. This frees up resources and time on the editing workstation by offloading, primarily, the transcoding of H.265 video to H.264 onto the ingestion server." Check out the Related Videos and links too...

Almost the entire project is based on Open Source software including FFmpeg and FastCopy. The exception is the use of PsExec, though it can easily be adapted to use PAExec instead.

Both batch files and a readme can be found on the project GitHub page.

Posted by Don's Deals Blog at 4:36 PM No comments: