From Wikipedia, the free encyclopedia
For other uses, see Davos (disambiguation).

Davos (Romansh: Tavau, Italian: Tavate, local German pronunciation [daˈvoːs])[2] is a municipality in the district of Prättigau/Davos in the canton of Graubünden, Switzerland. It has a permanent population of 11,248 (2009). Davos is located on the Landwasser River, in the Swiss Alps, between the Plessur and Albula Range. At 1,560 meters (5,120 ft), it is the highest city in Europe.[3]

Davos is host to the World Economic Forum (WEF), an annual meeting of global political and business elites (often referred to simply as Davos) and the home of one of Switzerland's biggest ski resorts. At the end of every year it serves as the site of the annual Spengler Cup ice hockey tournament, hosted by the HC Davos local hockey team.

The current settlement of the Davos area started back in High Middle Ages with the immigration of Rhaeto-Romans. The village of Davos is first mentioned in 1213 as Tavaus.[4] From about 1280 the barons of Vaz allowed German-speaking Walser colonists to settle down, and conceded them extensive self-administration rights, causing Davos to become the largest Walser settlement area in eastern Switzerland. Natives still speak a dialect that is atypical for Graubünden, showing similarities with German idioms of western parts of Switzerland, especially the Upper Valais.

In 1436, the League of the Ten Jurisdictions was founded in Davos. 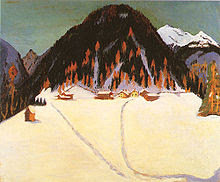 From the middle of the 18th century, Davos became a popular destination for the ailing because the microclimate in the high valley was deemed excellent by doctors and recommended for lung disease patients. Robert Louis Stevenson, who suffered from tuberculosis, wintered in Davos in 1880 at the recommendation of his Edinburgh physician Dr. George Balfour. Arthur Conan Doyle wrote an article about skiing in Davos in 1899. A sanatorium in Davos is also the setting of the Thomas Mann novel Der Zauberberg (The Magic Mountain). Between 1936 and 1938, Ernst Ludwig Kirchner, then at the end of his life, depicted Davos and the Junkerboden. His painting has a both romantic and pantheistic atmosphere and simplified formal structure. 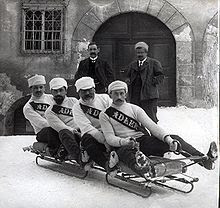 In the "natural ice" era of winter sports, Davos, and the Davos Eisstadion was a mecca for speed skating. Many international championships were held here, and many world records were set, beginning with Peder Østlund who set four records in 1898. The only European Bandy Championship was held in the town in 1913 with England victorious.[5] Subsequently, Davos became a famous ski resort, especially frequented by tourists from the United Kingdom and the Netherlands.[citation needed] After peaking in the 1970s and 1980s, the city settled down as a leading but less high-profile tourist attraction. 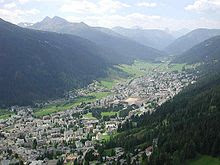 View of Davos from paraglider. 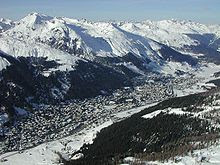 Davos from the air

The municipality is located in the Davos sub-district of the Prättigau/Davos district in the Landwasser valley. In terms of area, it was ever the largest city in Switzerland (until the merged municipality of Glarus Süd in 2010) and the largest in the canton of Graubünden. It consists of the village of Davos which is made up of five sections (Davos-Dorf, Davos-Platz, Frauenkirch, Glaris and Monsteinand) and the hamlets of Laret, Wolfgang, Clavadel and Spina in the main valley. In the side valleys there are additional hamlets including; Flüela, Dischma and Sertig.

Davos lies in a high valley, the connection to Klosters needing a pass of only some 70 meters ascent from Davos Dorf. This tiny pass results in a flow direction of the river not corresponding to the main traffic routes of road and railway to the northeast but flowing in a southwesterly direction. Three long side valleys reach out to the south from the main valley.

Davos with the Vaillant Arena (center) 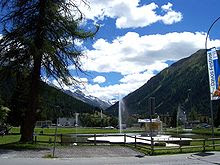 Park on the Promenade

The entire Swiss population is generally well educated. In Davos about 74% of the population (between age 25-64) have completed either non-mandatory upper secondary education or additional higher education (either University or a Fachhochschule).[6]

The historical population is given in the following table:[4]

Davos is known in the whole Switzerland for its famous Ice hockey team, which is the HC Davos, who play in the Swiss National League A. Their home arena is the Vaillant Arena.

Besides being famous for cross country skiing, offering some 60 miles (97 km) of pistes and the largest natural ice skating field, there are six main ski areas in winter, adding to a total of 200 miles (320 km) of slopes:

All areas offer summer transport as well onto the main peaks from mid May until end of October. The remote side valleys heading towards the Engadin area are worth long hikes towards the passes of Sertig or Scalettapass, to for example reach Piz Kesch, an Ultra prominent peak. To the north there is no valleys but a direct ascent to continue across a pass into the "Schanfigg" valley towards the rival resort of Arosa (to be reached in one day) or even continuing to Lenzerheide in a two day hike.[10]

Davos is home to seven sites that are listed as Swiss heritage sites of national significance. These heritage sites include the Town Archives, the Kirchner Museum, the Grosses Jenatschhaus (a type of charity house known as a Pfrundhaus) and the Forest Cemetery (Waldfriedhof). Several hotels and spas are also included on the list. The three hotels or former hotels are; Berghotel Schatzalp, the former Grand Hotel Belvédère and the Zürcher Höhenklinik von R. Gaberel.[11]

Davos hosts annual meetings of the World Economic Forum. The city was featured in an episode of Viva La Bam, when cities around Europe were visited. On 14 March 2003, a festival called Winterjam was held in the city and bands such as Sum 41, Crazy Town, and Guano Apes performed during this event.[12]