Arduino is a fascinating and very easy way to make the world of electronics fun and interesting. Scroll down to read what we’re up to!
But what is it? From their web page:


Arduino is an open-source electronics prototyping platform based on flexible, easy-to-use hardware and software. It’s intended for artists, designers, hobbyists, and anyone interested in creating interactive objects or environments.
Arduino can sense the environment by receiving input from a variety of sensors and can affect its surroundings by controlling lights, motors, and other actuators. The microcontroller on the board is programmed using the Arduino programming language (based on Wiring) and the Arduino development environment (based on Processing). Arduino projects can be stand-alone or they can communicate with software on running on a computer (e.g. Flash, Processing,MaxMSP).
The boards can be built by hand or purchased preassembled; the software can be downloaded for free. The hardware reference designs (CAD files) are available under an open-source license, you are free to adapt them to your needs.
Arduino received an Honorary Mention in the Digital Communities section of the 2006 Ars Electronica Prix. The Arduino team is: Massimo Banzi, David Cuartielles, Tom Igoe,Gianluca Martino, and David Mellis. Credits 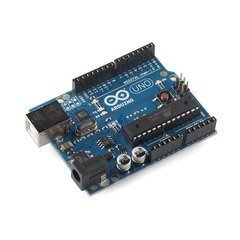 Arduino Uno (Duemilanove is fine as well)
One can also use an improved upon the original, 100% Arduino Uno-compatible board with built-in prototyping space – the Freetronics Eleven. 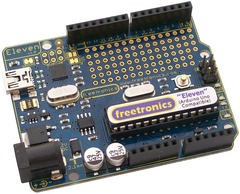 Over semi-regular intervals you will find a new instalment of my “Getting Started with Arduino” tutorials. If you have not used the system before, please start with Chapter Zero! In the first few chapters of the tutorials we refer to the book “Getting Started with Arduino” by Massimo Banzi. Furthermore, readers who submit interesting photos, videos or links to their work based off our tutorials may win a prize!

Technical support for the tutorials is available by asking a question in the Google Group. Please note that video clips in the tutorials do not have any voice, but some later ones may have a musical track. (I don’t like the sound of my own voice at all).
After a few weeks I would hope that you have enough building blocks of knowledge to be able to bring your ideas to life!
*** A list of recommended parts is updated with each new chapter and can be found here: product list ch 0-32.pdf ***
Files and sketches from each chapter can be downloaded directly from the file repository.
All the original material in these tutorials, unless noted otherwise, is published under a Creative Commons Attribution-Non Commercial-Share Alike v3.0 license. If you would like to use the work in other situations, please email me at john (at) tronixstuff dot com.

A quick summary of where we are up to so far:
Chapter Zero