NOVA | A Quantum Leap in Computing

A Quantum Leap in Computing

Imagine a futuristic computer so powerful that it could quickly solve problems that even a supercomputer of today would need billions of years to grapple with. While it doesn’t exist yet, prototypes of such a magical machine are currently in operation at MIT, sorting out puzzles of quantum physics that no ordinary computer could handle. In this interview, MIT mechanical engineer Seth Lloyd, who helped establish the field of quantum computing, describes its revolutionary potential. 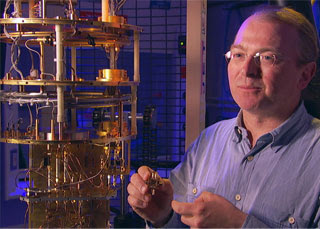 Seth Lloyd thinks that quantum computers similar to this one will not only have practical applications but also help solve mysteries of the utterly strange and super-small quantum realm. Enlarge Photo credit: © WGBH Educational Foundation

NOVA: Quantum mechanics has taught us that nature is pretty weird. Is it possible to take advantage of that?

Quantum mechanics is just completely strange and counterintuitive. We can't believe that things can be here [in one place] and there [in another place] at the same time. And yet that's a fundamental piece of quantum mechanics. So then the question is, life is dealing us weird lemons, can we make some weird lemonade from this?

Well, if you can have something that's here and there at the same time, then you can have a quantum bit [of information], or Q-bit as it's sometimes called, that can effectively register zero and one simultaneously. If you can do that, you can start processing information in some funky, quantum mechanical way, which nobody understands, that allows you to take advantage of this quantum weirdness.

Let's back up to some basics. How does a traditional computer store information?

Is that information—that zero or one—something physical, like a switch?

Yeah. The IBM physicist Rolf Landauer was fond of saying "information is physical." It's a slogan, but it really is true in the sense that whenever we process information, be it in a computer or in our brains, that information is represented by something. In your computer, if you have a bunch of electrons over here—we call that a zero—and a bunch of electrons over there—we call that a one. And if these electrons go from here to there, then zero is turning into one, the bit is flipping. An ordinary computer is simply doing that with many, many bits, billions of times a second.

How is a quantum computer different?

Think of miniaturizing a computer so that a bit is stored on an individual electron, so that a single electron over here is zero and a single electron over there is one. Now, an electron has this funny feature in quantum mechanics that it's really a wave, and this wave can be both here and there at the same time. And that means that the quantum bit that the electron represents registers both zero and one simultaneously. It also wiggles up and down a lot like a wave.

So how do you make those quantum bits into a computer?

Well, that's trickier! But nature supplies us with lots of electrons. And at bottom, nature is quantum mechanical, so all the things that we think of as particles like electrons have waves associated with them. If we can control them in a systematic fashion, then we can make a quantum computer. 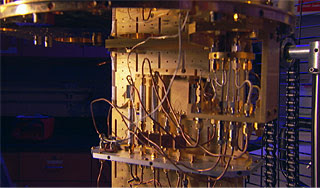 The Q-bits at the heart of this quantum computer are superconducting circuits roughly the size of bacteria—far too tiny to see with the naked eye. Baffling our notions of what’s possible, these circuits can run both clockwise and counterclockwise simultaneously. Enlarge Photo credit: © WGBH Educational Foundation

Why are quantum computers useful? Are they, in some sense, better than a standard computer?

Well, the first reason that quantum computers are useful is that they're just cool, let's face it! Like, so weird, like, whoa! Amazing, can that really happen? And the answer is "yes," because you can build quantum computers, and we've been building them for years now.

But the second reason is that if you have a different way, and a fundamentally weird way, of registering and processing information, then it means you can do computations in ways that our classical brains could not have dreamed of.

Then, in 1994, Peter Shore, who was then at AT&T and is now at MIT, came up with a killer app for quantum computers. (And maybe we should spell it Q-I-L-L-E-R because whenever you quantize something, you take a letter and turn it into a Q.) The Qiller app for quantum computers is breaking codes, codes like the ones we use whenever we use our bankcards.

How do these codes work?