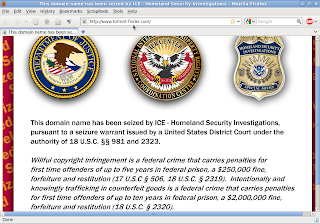 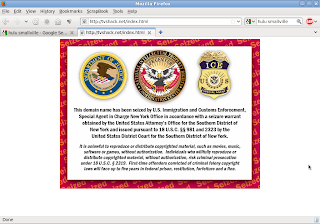 Seen any of these Lately???

I don't use BitTorrent Sites often. But, since I'm into Free and Open Source Software and Linux Operating Systems. Some of these do use BitTorrent Peer to Peer File sharing to cut down the load on their Download Servers. And as far as I know it is still Legal in the US to loan a Song, a Movie or a TV Show you've recorded to a friend so that they can watch or listen to it... As long as they don't make copies and sell it. So, why is Downloading them from an online friend any different??? I'm a "Singer Song Writer" and I have all of my Songs up on my Server, for Free Download. Well, actually it's down, in the floor under my feet right now as I write this... I'm resting my feet on my Server. My Web Site, DonSongs.com is Self Hosted and routed through homeip.net since my IP address is Dynamic and ever changing. I'm a big believer in the Power of Giving and see what the future could be for the World and our Children, if We The People were in Control of the Advances in Technology. Instead of all of these Greedy Corporations who seek to Hoard and Control all the Knowledge and Money in the World! Now, I'm not saying that Everything Should be Free and the No One should be Paid for all of their hard work. I have done my fair share of Volunteering in my life and have had my music up for free downloading for about 10 years now, without Receiving One Single Donation or one Order for a CD. No, it Doesn't Completely Suck!;) Don't take my word for it... download and listen for your self. Not everyone at once though!:O I don't have allot of Bandwidth with my ISP!:O I got to thinking while reading these articles... I have MP3's for Download on my Site (They are all my Music and I Own the Copyrights). But, what if my Site is down and I don't even know it!:O It's still works, I just Checked!;) The thing is, this whole issue is all about Control and there needs to be Ballance, No one or No Single Entity Should Be allowed to Control Anything. Of Course Stealing is Wrong. If it Don't Belong to you... and the Owner Didn't Give it to you... Don't take it! But, as one wise man once said something like this... With Absolute Power, Comes Absolute Corruption...

This arose as a quotation by John Emerich Edward Dalberg Acton, first Baron Acton (1834–1902). The historian and moralist, who was otherwise known simply as Lord Acton, expressed this opinion in a letter to Bishop Mandell Creighton in 1887:

Following on the heels of this week’s domain seizure of a large hiphop file-sharing links forum, it’s clear today that the U.S. Government has been very busy. Without any need for COICA, ICE has just seized the domain of a BitTorrent meta-search engine along with those belonging to other music linking sites and several others which appear to be connected to physical counterfeit goods.
While complex, it’s still possible for U.S. authorities and copyright groups to point at a fully-fledged BitTorrent site with a tracker and say “that’s an infringing site.” When one looks at a site which hosts torrents but operates no tracker, the finger pointing becomes quite a bit more difficult.
When a site has no tracker, carries no torrents, lists no copyright works unless someone searches for them and responds just like Google, accusing it of infringement becomes somewhat of a minefield – unless you’re ICE Homeland Security Investigations that is.
This morning, visitors to the Torrent-Finder.com site are greeted with an ominous graphic which indicates that ICE have seized the site’s domain.
“My domain has been seized without any previous complaint or notice from any court!” the exasperated owner of Torrent-Finder told TorrentFreak this morning.
“I firstly had DNS downtime. While I was contacting GoDaddy I noticed the DNS had changed. Godaddy had no idea what was going on and until now they do not understand the situation and they say it was totally from ICANN,” he explained.
Aside from the fact that domains are being seized seemingly at will, there is a very serious problem with the action against Torrent-Finder. Not only does the site not host or even link to any torrents whatsoever, it actually only returns searches through embedded iframes which display other sites that are not under the control of the Torrent-Finder owner.
Torrent-Finder remains operational through another URL, Torrent-Finder.info, so feel free to check it out for yourself. The layouts of the sites it searches are clearly visible in the results shown.
Yesterday we reported that the domain of hiphop site RapGodFathers had been seized and today we can reveal that they are not on their own. Two other music sites in the same field – OnSmash.com and DaJaz1.com – have fallen to the same fate. But ICE activities don’t end there.
Several other domains also appear to have been seized including 2009jerseys.com, nfljerseysupply.com, throwbackguy.com, cartoon77.com, lifetimereplicas.com, handbag9.com, handbagcom.com and dvdprostore.com.
All seized sites point to the same message.
Domain seizures coming under the much debated ‘censorship bill’ COICA? Who needs it?
Update: Below is an longer list of domains that were apparently seized. Most of the sites relate to counterfeit goods. We assume that the authorities had a proper warrant for these sites (as they had for RapGodFathers yesterday), but were unable to confirm this.
Update: A spokeswoman for ICE confirmed the seizures in the following statement. “ICE office of Homeland Security Investigations executed court-ordered seizure warrants against a number of domain names. As this is an ongoing investigation, there are no additional details available at this time.”
Update: The authorities have revealed further details on “Cyber Monday Crackdown.”