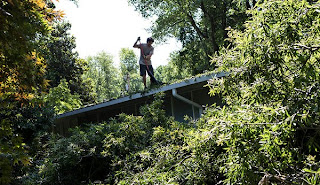 Storm damage in the 16th Street Heights neighborhood of Washington on Saturday morning. Friday brought a record temperature of 104 degrees in the city and then a ferocious storm at night. More Photos »

The damage was most severe in the Washington suburbs of Northern Virginia and Maryland, where some residents huddled in their basements as the storm ripped through the area, blowing down trees, upending lawn furniture and tearing off roof shingles.

“It came on very suddenly,” said Laurie Singer, a resident in a heavily wooded area of Potomac, Md. Her home has large plate-glass windows, and she spent 45 minutes huddled in the bathtub, listening as the huge oak trees outside slapped against the glass.

“It was a very short burst of heavy rain and then you heard this swooshing sound, and it was the wind,” she said. “I actually felt the house shaking.”

But after the storms dissipated on Saturday, the heat set in. Temperatures soared into the triple digits in some places. With utility crews struggling, people across the mid-Atlantic faced the prospect of days without electricity.


By Salvador Rodriguez This post has been corrected. See note below.

A massive thunderstorm near the nation's capital Friday night knocked Netflix, Instagram and Pinterest offline for a few hours.

The three companies suffered major interruptions to their Web services to people everywhere after the huge storm knocked the power from an Amazon data center that the sites rely on. The companies took to social networks to tell their users what was happening.

Amazon said the storm caused its data center to lose power, according to the Associated Press.

"Severe thunderstorms caused us to lose primary and backup generator power to an Availability Zone in our east region overnight,” an Amazon spokeswoman said, according to Wired. “We have restored service to most of our impacted customers and continue to work to restore service for our remaining impacted customers.”