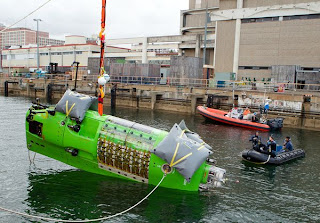 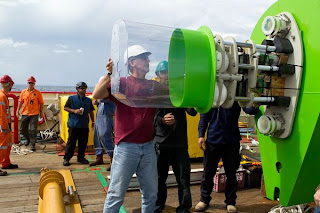 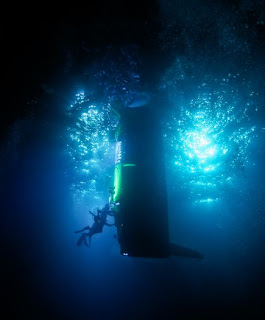 
The Videos Below are suppose to be 3 different one's. The first one, should be the same as the one above from YouTube. I added it, after noticing a problem. It was my favorite and I wanted to make sure and share it. They worked perfectly on my first Page Load. But, after watching them and Reloading the Page. They were showing all the same Video. Must be some weird Auto Changing Code, that they Provided. I'm leaving them as they are. Just in case they work for everyone else. If they don't. You can use the links in the Video Headings to get to the other Video's on their Pages... 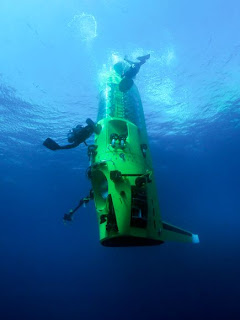 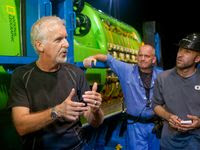 His depth on arrival: 35,756 feet (10,898 meters)—a figure unattainable anywhere else in the ocean.
Reaching bottom, the National Geographic explorer and filmmaker typed out welcome words for the cheering support crew waiting at the surface: "All systems OK."
Folded into a sub cockpit as cramped as any Apollo capsule, the National Geographic explorer and filmmaker is now investigating a seascape more alien to humans than the moon. Cameron is only the third person to reach this Pacific Ocean valley southwest of Guam (map)—and the only one to do so solo.
Hovering in what he's called a vertical torpedo, Cameron is likely collecting data, specimens, and imagery unthinkable in 1960, when the only other explorers to reach Challenger Deep returned after seeing little more than the silt stirred up by their bathyscaphe.
After as long as six hours in the trench, Cameron—best known for creating fictional worlds on film (Avatar, Titanic, The Abyss)—is to jettison steel weights attached to the sub and shoot back to the surface. (See pictures of Cameron's sub.)
Meanwhile, the expedition's scientific support team awaits his return aboard the research ships Mermaid Sapphire and Barakuda, 7 miles (11 kilometers) up. (Video: how sound revealed that Challenger Deep is the deepest spot in the ocean.)
"We're now a band of brothers and sisters that have been through this for a while," marine biologist Doug Bartlett told National Geographic News from the ship before the dive.
"People have worked for months or years in a very intensive way to get to this point," said Bartlett, chief scientist for the DEEPSEA CHALLENGE program, a partnership with the National Geographic Society and Rolex. (The Society owns National Geographic News.)
"I think people are ready," added Bartlett, of the Scripps Institution of Oceanography in San Diego, California. "They want to get there, and they want to see this happen."
(Video: Cameron Dive Is an Exploration First.)
Rendezvous at Challenger Deep
Upon touchdown at Challenger Deep, Cameron's first target is a phone booth-like unmanned "lander" dropped into the trench hours before his dive.
Using sonar, "I'm going to attempt to rendezvous with that vehicle so I can observe animals that are attracted to the chemical signature of its bait," Cameron told National Geographic News before the dive.
He'll later follow a route designed to take him through as many environments as possible, surveying not only the sediment-covered seafloor but also cliffs of interest to expedition geologists.
"I'll be doing a bit of a longitudinal transect along the trench axis for a while, and then I'll turn 90 degrees and I'll go north and work myself up the wall," said Cameron, also a National Geographic Society explorer-in-residence. (Listen: James Cameron on becoming a National Geographic explorer.)
Though battery power and vast distances limit his contact with his science team to text messaging and sporadic voice communication, Cameron seemed confident in his mission Friday. "I'm pretty well briefed on what I'll see," he said.
(Video: Cameron Dive First Attempt in Over 50 Years.)
Bullet to the Deep
To get to this point, Cameron and his crew have spent seven years reimagining what a submersible can be. The result is the 24-foot-tall (7-meter-tall) DEEPSEA CHALLENGER.

Engineered to sink upright and spinning, like a bullet fired straight into the Mariana Trench, the sub can descend about 500 feet (150 meters) a minute—"amazingly fast," in the words of Robert Stern, a marine geologist at the University of Texas at Dallas.
Pre-expedition estimates put the Challenger Deep descent at about 90 minutes. (Animation: Cameron's Mariana Trench dive compressed into one minute.)
By contrast, some current remotely operated vehicles, or ROVs, descend at about 40 meters (130 feet) a minute, added Stern, who isn't part of the expedition.
Andy Bowen, project manager and principal developer of the Nereus, an ROV that explored Challenger Deep in 2009, called the DEEPSEA CHALLENGER "an extremely elegant solution to the challenge of diving a human-occupied submersible to such extreme depths."
"It's been engineered to be very effective at getting from the surface to the seafloor in as quick a time as possible," said Bowen, of Woods Hole Oceanographic Institution, who also isn't part of the current expedition.
And that's just the idea, the DEEPSEA CHALLENGE team says: The faster Cameron gets there, the more time for science. (Read more about DEEPSEA CHALLENGE science.)
Pursuing speed and science in tandem makes the DEEPSEA CHALLENGER test dives—and even the Mariana Trench mission—perhaps as unorthodox as the sub itself.
Typically "you conduct a sea trial for a vehicle, you pronounce it fit for service, and then you develop a science program around it," Cameron said before heading to the trench. "We collapsed that together into one expedition, because [we were] fairly confident the vehicle would work—and it is."
Techno Torpedo


Read More and watch for more Video Links too...
http://news.nationalgeographic.com/news/2012/03/120325-james-cameron-mariana-trench-challenger-deep-deepest-science-sub/?source=hp_dl1_news_dsc20120325

Piccard’s most successful bathyscaphe, the Trieste, was launched in 1953 and dived to 3,150 meters (10,300 feet). In 1958, the United States Navy purchased the Trieste and designed a new cabin that would enable it to reach the floor of ocean trenches. Equipped with this new cabin, the Trieste reached the deepest known point on Earth, the Challenger Deep in the Mariana Trench, on January 23, 1960. Located 10,915 meters (35,810 feet) below the ocean’s surface, the Challenger Deep is deeper than the height of Mount Everest!

An amazing feat of oceanic navigation, the Trieste expedition remains the only manned dive to ever reach the Challenger Deep. Two other unmanned vehicles reached the Challenger Deep in 1995 and 2009, more than 40 years after the Trieste’s descent. The Trieste is now housed at the U.S. Navy Museum in Washington, D.C.
Read More...
http://education.nationalgeographic.com/education/encyclopedia/bathyscaphe/?ar_a=1&ar_r=3


Read about The Bathyscaph (Trieste) Dive to the Bottom of the Sea, 1960.

This article was originally published in the August 1960 issue of National Geographic magazine and retains the original language and spellings.

“Do you think we shall be able to make the dive?”
The voice of our faithful engineer, Giuseppe Buono, was taut with anxiety. A 37-year-old Italian, he had already prepared the Trieste for diving 64 times, first in the Mediterranean and this year in the western Pacific off Guam. Now he was wondering whether it was not sheer madness for the bathyscaph to attempt to descend 36,000 feet—nearly seven miles—under existing conditions. In fact, I was wondering the same thing myself.
The date was January 23, 1960. The United States Navy’s ocean-going tugboat Wandank had been towing the Trieste for four days; now we were some 220 miles from our base on Guam.

The Bathyscaph (Trieste) Dive to the Bottom of the Sea, 1960.


That is something I would love to do! But, there's no way I could go that long without stepping out to take a leak!:O Yes, I think that I would Spring a Leak, long before the Challenger ever would!;)